Great British Women in the car industry – a volunteer reports

During June, volunteer Ian Hicks, who played a large part in organising the Museum’s Symposium back in March, received an invitation along with Emma Rawlinson, Family and Lifelong Learning Officer, to attend Autocar’s celebration of Great British women in the car industry.  This is Ian’s account of the day;

This is the second year that Autocar magazine has recognised and celebrated the rising women stars of the British Motor Industry. The event, to inspire more women to consider a career in the industry we love, was hosted at the home of English Rugby, Twickenham stadium. 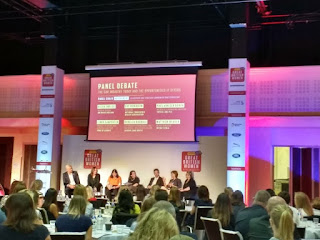 The panel on stage

The current imbalance between the numbers of men and women in the industry is dramatic.  By shining a spotlight on those who have both reached the top, and the industry's brightest rising stars, Autocar and the organisers hope more women will consider the rich, exciting careers that are open to them.

The day was really inspiring with talks and panel discussions with the great and the good from across the British Motor Industry. There were some interesting insights into development of the Land Rover Velar, and the Riversimple hydrogen powered car, a whole new concept in vehicle “ownership.”

It was inspiring to see how many women had achieved senior roles in the automotive industry, Emma and I had a really enthusiastic conversation with Helen Emsley, the Head of Design at General Motors in US. It was interesting to hear how they do all their styling in-house and have their own model-makers, carpenters and artists-in-clay to create and better control their vehicle styling. 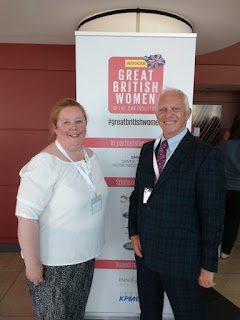 Emma and I were able to network and build contacts for future events at the Museum. As ever, it was really gratifying to hear pretty well everyone had heard of British Motor Museum and were all, to a man (or maybe woman) really complimentary about what we do.

Posted by BMMVolunteers at Wednesday, July 19, 2017