Volunteers settle into their new roles

Owing to a trip down under to New Zealand, it's been some time since I wrote our last blog in early January. During that time a lot has happened at the British Motor Museum.

The refurbished Museum, along with the new Collections Centre, opened to the press on 12 February and then the general public the following day. This generated a lot of interest, both locally and nationally with good press and TV coverage. The reopening also coincided with school half-term, which ensured a great initial turn out from the public.

Prior to the reopening the volunteers spent several days helping the Museum's staff move all the stored vehicles into their appropriate new locations, either within the existing refurbished Museum, or in the Collections Centre. 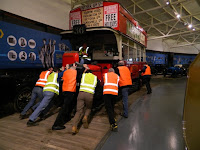 As can be clearly seen, some vehicles were far more easily moved than others

The Museum now contains around 80 vehicles, arranged in themed areas, such as the Time Road, Prototypes, Sport cars etc., with educational graphics and interactive displays.  The Collection Centre, which is a separate new building, contains the Museum's reserve collection of cars on the first floor with the Jaguar Heritage Collection on the ground floor. All can be viewed as part of the Museum's general admission ticket. 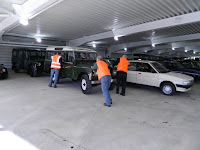 Although the volunteers are still involved in many other projects at the Museum, our main involvement is now acting as guides at the new Collections Centre. Whilst the public is free to roam around the main Museum at leisure, viewing of the Collection Centre must be supervised and controlled by tour guides.

As I write, the exact arrangements for tours are still the subject of some discussion and feedback analysis. The basic plan is still to have around four guided tours per day, which should be booked if possible on arrival at the pay desk. However, on busy school holiday periods for instance, we've already trialled a general "open house" period, which seems to work well. So, please check at the pay desk on arrival for Collection Centre tour details.
Posted by BMMVolunteers at Monday, April 18, 2016 No comments: