Volunteer History Talks - The Most Beautiful Car in the World. 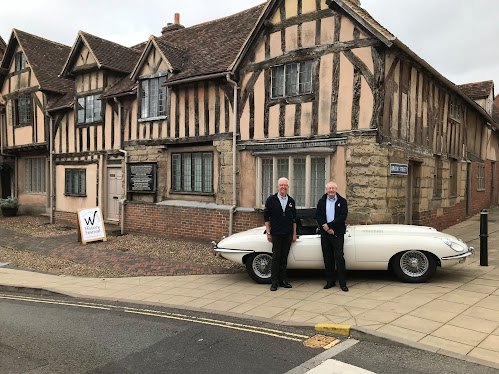 Graham Robson and Cameron Slater outside the Lord Leycester Hospital with a Series 2 E-type from the Jaguar Daimler Heritage Trust Collection.
The Jaguar E-type was sixty years old this year. Obviously, such a significant event in motoring history could not be left unmarked so the E-type became one of the series of History Talks which the Life-long Learning Team has devised. The E-type team of volunteers Roger Gollicker, Andrew Pollard, Graham Robson and Cameron Slater, faced the small problem of a deadline – the talk had to be ready for performance by 15 March – the exact anniversary of the E-type’s launch in 1961. We had about six months to do justice to this fabulous motor car and we made it – but only just.

Very soon ‘The Most Beautiful Car in the World’ moved from being a working title for the talk to being the actual one. After rather a long Covid-affected gestation period it is difficult to remember whose idea it was to call the talk that.

In the days when we all sat a long way away from each other, it soon became evident that there was a person at the meetings who knew a great deal about Jaguars and certainly about this one but wasn’t actually one of the presentation team! That man was Tony Merrygold, who is the Vehicle Collections Manager of Jaguar Daimler Heritage Trust (JDHT). His fund of stories showed us almost immediately that with his input, we had a real gem of a presentation. The team could happily research the facts Page 5 The Most Beautiful Car in the World and the history, but Tony’s fund of stories promised glamour, humour and real personal experiences.

Inevitably, there were many revisions of the script - we are currently on version 16 - but it’s been a very rewarding process. The culmination of all that work was, of course, to present to a public audience. So far, we have done that twice. Once to a group of lovely people who had booked the talk as a birthday present for one of their Jaguarmad friends, via the wonders of Zoom. The second was as part of the Warwick Words Festival when we faced a live audience of about 95 people in the Great Hall of the Lord Leycester Hospital in Warwick.

Of course, we were not alone. Emma Rawlinson and Bryony Goodwin from LifeLong Learning were always there to help and Karam Ram at JDHT was a wizard at finding the right image. We all enjoyed being part of this project and we hope our audiences get as much out of it as we did.

Posted by BMMVolunteers at Friday, November 26, 2021 No comments: